ATA started with one student - Alex Rodrigues. From a great background in FTC and FRC, winning world championships in FTC and winning a spot to world championships in FRC, he chose during his grade 11 year to start a team at Bishop Carroll. In a short 6 months, he organized, trained and got the resources that were required in order to compete in 2012. Although it would be a great accomplishment for such a team to finish a robot on time, the team’s goals were higher. From making a practise robot, to analyzing live streams for hours, to strategizing alliance possibilities, the team set themselves up to be winners. And they did win. Being highest seeded rookie team, and winning rookie all-star award in the Greater Toronto Regional, they earned their spot in the world championships in St. Louis.

In St. Louis, the humble beginnings soon began big dreams. After a struggle in qualifications surrounded by technical problems, they were able to pique the interest of hall-of-fame team 1114 and team 2056, the longest winning streak holder in FIRST. This alliance selection was later dubbed the “Eh Team”, in reference to their dominant strategy, and the three teams’ Canadian heritage. ATA’s defense, coupled with 2056’s fast shooting and 1114’s accuracy became a triple threat that won them their division in the world championships, bringing them to the Einstein field - the most prestigious field in FIRST.

Briefly after this run, ATA went on to win what is commonly known as the hardest competition, IRI, with 1114 and 2826. 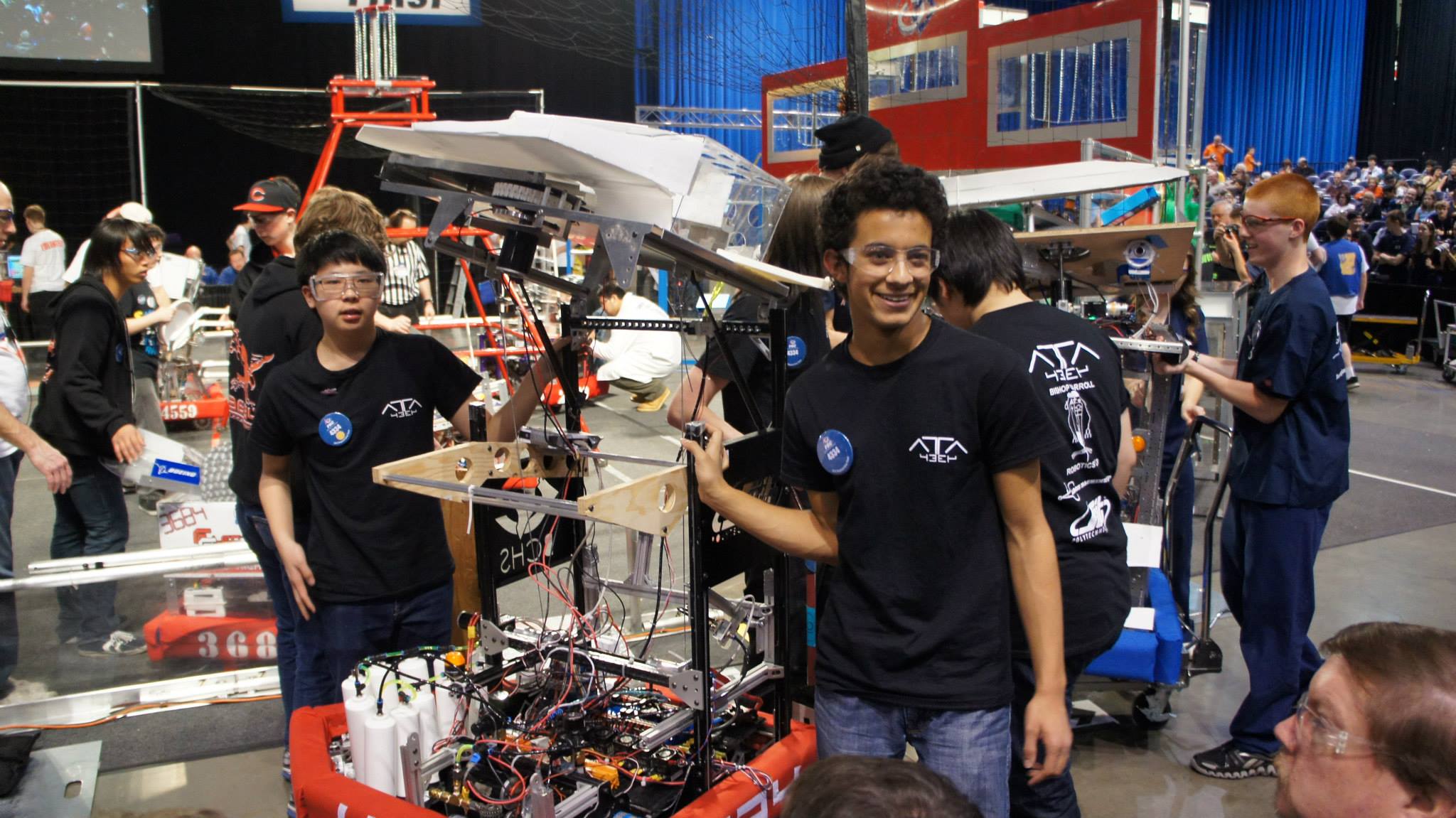 The 2013 and 2014 seasons brought some success. ATA won the FIRST Western Canadian regional in both years. At the 2013 Championships, the team made it quarterfinals in Galileo Division. In 2014, the team won the Regional Chairman's Award for Western Canada and made it to the Curie Division.

In the 2015 season, ATA, along with 624 (CRyptonite) and 1619 (Up-A-Creek Robotics) won the Utah Regional and got placed in the Archimedes Division during the 2015 Championship. The team also took home the Innovation in Control Award sponsored by Rockwell Automation at the Western Canadian Regional.

2016 was another successful season for ATA. With Team 2468 (Team Appreciate) and Team 3166 (First Year Ravens), ATA won the Utah Regional in Salt Lake City for the second time. This win earned them a spot at the FRC Championships in St. Louis. Team 4334 also won the “Excellence in Engineering” award in Utah. ATA also won their second event, the Western Canada regional in Calgary, with Team 2013 (Cybergnomes) and Team 4625 (Trappers). 4334 received the “Creativity” award at the Western Canada Regional as well. At FRC Championships ATA was placed in the Hopper division. Here they Teamed up with Team 294 (Beach Cities Robotics), once again Team 2013 (Cybergnomes) and Team 1732 (Hilltoppers). Unfortunately, they were defeated by the eventual division champs in the semifinals by Teams 364 (Team Fusion), 148 (Robowranglers), and 1678 (Citrus Circuits). ATA and their alliance finished with a 5th place ranking in the Hopper division of the FRC Championships.

In 2017, ATA competed at the Utah Regional in Salt Lake City once again. ATA’s robot, Pivot, was simple and could only intake gears from the human players and place them on the peg. Pivot also had a very fast and reliable climbing mechanism and rope. Teaming up with 3374 (Jackson Hole RoboBroncos) and 4627 (Manning Robotics) they were eliminated in the quarter finals and finished with a rank of 8. In the time after the Utah Regional, a ground gear intake was added to Pivot to improve gear intake reliability and speed. ATA then competed at the Western Canada regional. Here, Team 2122 (Team Tators) Teamed up with ATA and 1482 (Ghosts) to win the competition. This earned them a ticket to the FRC Championships in Houston. ATA also won the “Quality Award sponsored by Motorola Solutions Foundation” at the Western Canada Regional. ATA was placed in the Carver division at the championships. ATA chose Team 2471 (Team Mean Machine), Team 3256 (Warrior Borgs) and Team 599 (Robodox) to join the 3rd alliance. They were eliminated in the quarterfinals and finished with a rank of 4 in the Hopper Division.

In 2018, ATA competed in the inaugural Canadian Pacific Regional in Victoria, British Columbia. ATA’s robot had a claw to grab power cubes and place them on the switch or scale and ramps to help other robots climb at the end of the match. Aligning with Team 1868 (Space Cookies) and 5118 (K-BOTS), they were defeated by the event winners, Team 1241 (THEORY6) and their partners 6390 (Hephaestus) and 7173 (Iris Robotics) in the semifinals. However, ATA did win the “Industrial Design” award. In the time after the Canadian Pacific regional, some changes were made to the robot. The ramps were removed because of reliability and technical issues and a wheeled intake was added to improve cube cycle time and cube intake reliability. ATA once again competed at the Canadian Rockies Regional (formerly the Western Canada Regional). Being selected by 6679 (TESLA robotics) along with Team 6351 (Rundle College Robotics) they lost in the semifinals against powerhouse Teams 2122 (Team Tators), 359 (The Hawaiian Kids), and their third selection 4733 (Scarlett Robotics).

In 2019, ATA competed again in the Canadian Pacific Regional in Victoria, British Columbia. ATA's robot, Neutrino, was small and light to quickly cycle hatch panels and cargo from the loading station to the cargo ship and lower levels of the rocket. Becoming the 4th Alliance Captain, ATA teamed up with Team 7190 (The Vancouver Rainstorms) and 2444 (Kamehameha RoboWarriors) before losing to the event's winners, Team 359 (The Hawaiian Kids), 7498 (Wingus & Dingus), and 7796 (Breaker Robotics) in the semifinals. Nevertheless, ATA's unique and effective robot design earned them the "Quality Award". Following this competition, ATA prepared by redesigning their hatch and cargo intakes, allowing it to move horizontally to overcome defense. In the Canadian Rockies regional in Calgary, Alberta, ATA was again a member of the 4th Alliance alongside Team 6351 (Rundle College Robotics) and 5078 (ROBO-KAOS), which lost to the event winning alliance of Team 359 (The Hawaiian Kids), 2122 (Team Tators), and 6841 (Cerberus 2.0). However, ATA was awarded the "Quality Award" for their innovative robot and new intake.

In 2020, ATA competed in the Canadian Pacific Regional in Victoria, British Columbia. With a robot short enough to fit under the trench but also launch power cells into the high port, ATA was selected onto the 8th alliance alongside Team 7170 (Spooky Action Robotics) and Team 288 (The RoboDawgs). While ATA lost in the quarterfinals to the event's winners, Team 7498 (Wingus & Dingus), Team 3598 (SEStematic Eliminators), and Team 6496 (Ten More Tons), ATA won the "Judges' Award". Unfortunately, the COVID-19 outbreak led to postponement of FIRST Events following the Canadian Pacific Regional, cancelling ATA's plans to attend the Canadian Rockies Regional and prematurely ending ATA's season.